While my design soft spot has always and will always be architectural contrast, my professional work has led me to realize there is a strong consensus against that in most cases. To make matters worse (or better), anytime you can simplify design through a public process (where design literacy may vary), the better the outcome. 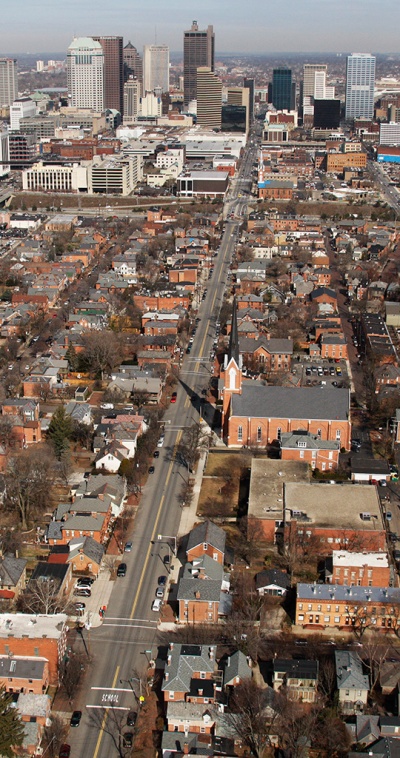 Historic districts promote uniformity, whether we admit this or not (through the theme of contributing properties, which may be one style or several that go together). Urban design guidelines and design districts do this as well through strict standards. That said, we also must admit uniform standards do work wonders toward preserving the quality of a district.

Design is subjective, and design standards and historic districts have been proven successful in objectively raising the bar toward an enactable minimum with which we can all accept. Toward that end, this post is not meant to be an attack on standards, but rather merely pointing out what lies outside the box. 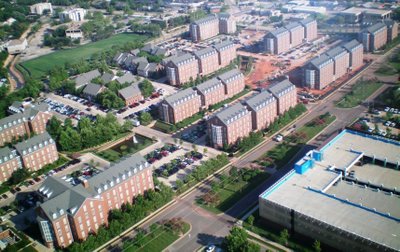 Most esteemed university campuses with which I am familiar also have a distinct style, often part of their brand. Oklahoma State University is Georgian. So Georgian that the Chesapeake Energy campus in OKC, with its older core of OK State knock-off buildings, is often called OSU-style and not Georgian. #SoGeorgian. University of Oklahoma is prairie gothic, which I always found to be weird. University of Texas is mission-style. University of Kansas is romanesque. KU really is stunning, as a non-Jayhawk.

The aforementioned examples revolve around classical styles, which are most commonly found in authentic samples. Developing anew in a historic motif, like Chesapeake, is rare and should be discouraged as far as architectural authenticity is concerned. That said, the future will not have homogenous 21st Century districts simply because we are almost always working with a pre-developed context. 100 years from now, the 21st Century styles that we will be preserving will be more mixed amongst older styles, so far as urban context is concerned. If we don’t reconcile our perspectives toward mixing architecture, we risk the chance of enacting the wrong standards and following the wrong approach altogether. Preservation must eventually become more sophisticated, just as development has. 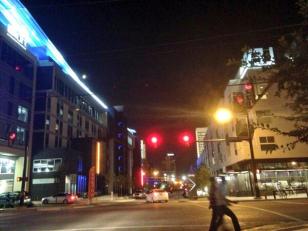 Modern design districts come in two forms. On one hand you have something like Deep Deuce in OKC, which is almost entirely new infill, developed over parking lots for which OKC’s historic black main street was demolished in the 50s and 60s. With very few original pieces still extant, those have been mostly restored, and some of the infill features nods to the red brick warehouses that once were. However, most of the infill, for lack of an authentic surrounding context, has been pretty outrageous – with free reign for architects to create a 21st Century neighborhood. Steve Lackmeyer, downtown beat writer for The Daily Oklahoman, wrote about Deep Deuce as the “complete” mixed-use neighborhood other cities dream about.

The last and most common case is where modern design truly coexists in a mixed environment, which usually includes a more nondescript historic building stock (else the modern would be toned down). In the case of University Circle in Cleveland, perhaps Ohio’s most magnificent square mile, few neighborhoods have so masterfully blended old and new, landmarks alike. That said, sometimes the new does endanger the old. CWRU has famously targeted entire historic districts for demolition, such as Hessler Street – giving rise to the famous Hessler Street Fair where the historic street stands tall against outside threats. Little Italy, (the smattering of cottages between the tracks and Murray Hill in the above photo), is better-protected – but its corners have been reinforced with high-end modern condos.

That mixed context, in my opinion, is the most impressive. I hate seeing historic landmarks in University Circle threatened, but as long as the neighborhood can evolve and retain ALL of them – University Circle remains the unquestioned most spectacular square mile of Ohio. It’s a rich and varied architectural cultural that befits Ohio’s cultural district. It’s as simple as that. Tearing down a building is not unlike the Cleveland Museum of Art moving out the Monet to make room for the Chihuly (which they would never do!), however refusing to make room for the Rothko also diminishes the overall value and authenticity.

That said, you don’t put the Rothko, Chihuly, and Monet in the same frame, let alone gallery. In Columbus, a locally-significant developer Jerry Solove (his family name is on the new OSU Medical Center), has proposed to demolish one of Old North Columbus’ most historic High Street blocks. While within two blocks there exists entire blocks of strip malls that could easily be demo’d for their concept, they of course must demolish the best block to make way for 11 stories of modern student housing. Worse yet, the entire project is designed to cleverly slip through zoning and design review in a city with shockingly weak development controls. The only two homes whose zoning would need to change have been swallowed into the development as a façadism nightmare. The setbacks going up every two floors also circumvent the height limits inherent within the zoning classification. With the city zoning administrator’s signature in hand already, the development could practically begin tomorrow and irrevocably demolish what little historic integrity remains on High Street, north of the OSU campus.

Just because there isn’t much integrity left doesn’t make that low-hanging fruit for redevelopment. Sophisticated cities, which Columbus just isn’t quite yet, find ways to retain the good and focus redevelopment opportunities where those opportunities actually exist. The flip side is the argument that “this argument is irrelevant because said development has this site, not that site.” That is the developer’s problem, not the city’s, or community’s. Otherwise there is natural development pressure to keep building up on the good sites, continuing to ignore the bad sites. What gives in the end? When that happens, you get the below nightmare (which really should also render the empty block of strip mall parking two blocks away).