Building off of my Community Design Studio work on designs for equitable “BRT-TOD” in Columbus’ Linden neighborhood, when tasked by my Graphic Communication for Planning practicum course to drum up a “plan” for the sake of graphic production exercises, I once-again wanted to showcase transit’s potential for community transformation. Working on the NKY Streetcar was an opportunity to contribute something that would further a rail-based transit proposal somewhere in this region.

In the way of housekeeping announcements, this is in no way intended to match an actual streetcar feasibility study, for which the NKY Streetcar Steering Committee is seeking a $300,000 federal grant. The feasibility study should ascertain ridership levels, engineering challenges (particularly with the Taylor Southgate Bridge), and so on. I also imagine the turning radii around 3rd-4th, Monmouth-York can also be problematic (one lesson learned from riding every modern streetcar on this side of the Rockies is that streetcars are amazingly smooth, except when negotiating turns, so the best routes are straight lines).

This is however intended to conjure the imagination of Northern Kentucky residents as to how their own community can be truly transformed within their lifetimes. The emphasis is on the graphics, which are intentionally bold and imaginative. I love NKY for a lot of reasons – for one, it truly is one of the few “European-styled” communities stateside, which would be a gag-worthy descriptor most places. I love the history and diversity of NKY. I really think a streetcar that hits all of the dense neighborhoods, including farther south (I make the case for looping around on MLK in the study), will benefit tremendously from the unparalleled economic diversity of these neighborhoods.

NKY is truly one of the few remaining corners of this country where the rich and the poor coexist happily side-by-side. You have incredibly wealthy pockets like Mansion Hill in Newport in walking distance to public housing on both sides of the Licking River. The historic building fabric of this region just naturally supports and lends itself to such depth of economic diversity. This will benefit a streetcar in terms of balancing ridership between transit-dependent residents and “gentrifiers” the likes of whom would only ride a streetcar. No one “constituency” is shut-out or served better than the other by a streetcar investment in this area.

Northern Kentucky and Southwest Ohio have a long history of working together toward planning for and building the region’s transportation network. This includes the I-275 outer loop, which serves all of NKY and even dips into the corner of Indiana to bring in a third state. The region’s airport is in NKY, and of course the Ohio River ports and bridges are the region’s historic transportation advantage. It should turn to this multi-state partnership once again toward building a comprehensive regional transit network.

For one, it is the only way to eventually connect the airport to Cincinnati; and more strategically, I think that the $2 billion Brent Spence Bridge project could be a potential funding opportunity for a parallel streetcar bridge. “Transportation alternatives” have been package-funded with highway projects before, and while the entire 5.3-mile streetcar would only add another 10% to the bridge project cost, even a partial funding chunk could close a funding gap alongside a TIGER grant, TIF revenues, and city capital. Realistically, operational funding could be re-appropriated from the South Bank Shuttle, although there could also be advantages to retaining that for a counter-clockwise or otherwise supplemental transit crossing. By maximizing transfer stations, the streetcar could better sync with TANK routes and optimize the region’s entire transit network.

Lastly, Covington, Newport, and even Bellevue already feature incredibly beautiful, dense, and historic neighborhoods. However, there are underutilized sites in Covington’s north end, along the Licking River, and toward I-71/75. A streetcar that passes through these pockets while connecting the premier neighborhoods could spread revitalization where it has lagged. In doing so, I have highlighted the potential TOD nodes. Furthermore, I have rendered how a streetcar station might enliven the in-tact parts, as well.

Toward the goal of TOD, it is worth noting that while I think TOD could be great for NKY, I would never recommend tearing down any extant building fabric. Historic rehabs work just fine, if not better in terms of scale-appropriateness, for TOD. Covington and Newport’s historic building stock has not been leveraged for economic development in the same way that OTR in Cincinnati has, due to Kentucky’s anemic historic tax credit program. A streetcar could be just what is needed to fully maximize the potential of these historic bones.

So there you have it. Both my latest class project, and hopefully, also a meaningful conversation starter for something that makes a huge difference in Northern Kentucky. That’s what this is all really about, and of course what transit should always be – a means to an end. 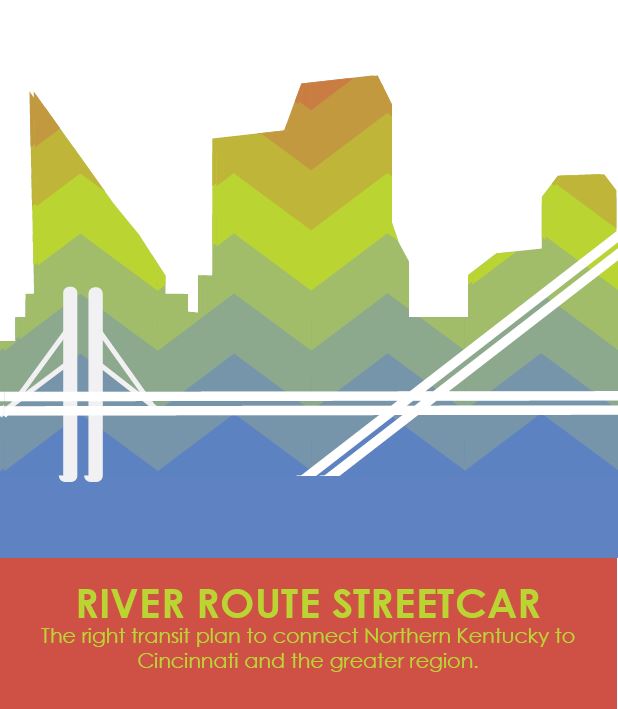