Stillwater, Oklahoma – the home of Oklahoma State University – has always had a quaint, albeit fledgling downtown area. When I was there for my undergrad, the five-block stretch of Main Street, along with surrounding blocks like 7th Street and Lewis Street, was really the best thing the town had going for it independent of OSU.

Back in 2012, as my time in Stillwater was coming to a close, I also served as an editor of the campus daily newspaper. One of my last columns advocated for a roundabout in downtown Stillwater. While at the time I did not fully understand the conditions and requirements for implementing a roundabout, the column printed, I got calls from several community leaders, and the seed was planted: 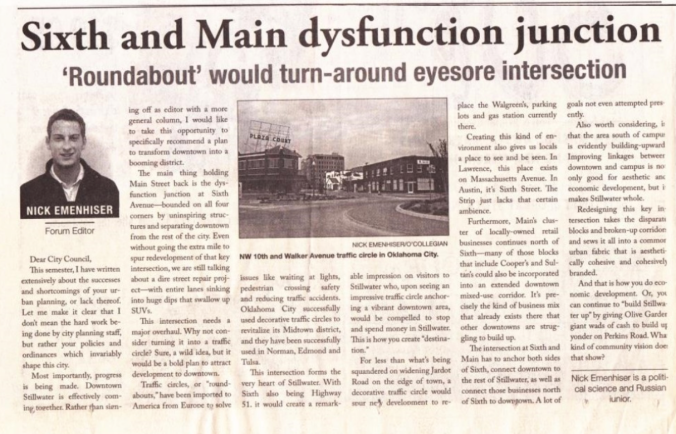 This is one of those things that reminds me of the difference between what someone says they want, and what they really want. What I said I wanted was a very specific type of roadway design that would in fact not be an ideal solution for the conditions at the location I had in mind. However, what I really wanted was for something, anything to be done to improve this awful intersection, which really is the classic weak gateway. Many small towns, even those with great downtowns, suffer from the classically underwhelming gateway from the local highway to said downtown. These spaces have proven over time too tempting for cities to cram unappealing, visually abhorrent, auto-oriented uses such as what you’ll find at Sixth and Main in Stillwater:

… which still looks just the way it always has. The reality is that the weak gateway here will probably endure, as the city lost a key development opportunity when they allowed a parking lot-oriented Walgreens, and the owner of the service station on the right corner used to be on City Council.

However, while progress is often more stubborn at more visible locations, always watch out for the sleeper candidate. 10th and Main, four blocks to the south of here, ended up being a perfect candidate for a roundabout. The wide ROW width on Main Street provided enough space without requiring additional land, and the lower traffic counts on both Main and 10th more evenly disperse through a small roundabout.

I think even though it’s not the exact roundabout I had called for, Stillwater still pulled off a nice project here. Even better, the entire project only cost $40,000, according to this Stillwater Newspress article, in which the fiscally-conservative local paper proffered a ringing endorsement (while still insisting that new-fangled things sure are scary).

I still think that Stillwater really needs to address beautification and traffic flow at its most important intersection, Sixth and Main. That said, major kudos to Stillwater for not just finding the right opportunity for the roundabout idea, but also for pulling off an incredibly cost-effective project, hopefully paving the way for other communities.