Cleveland has long produced all the right, actionable but unfunded, masterplans for everything on an urban planner’s wish list: planes and trains, active bike/pedestrian mobility, urban parks and greenways, lakefronts and riverfronts, boardwalks and beaches, skylines and ski chalets, and so on.

Just in my short window into Cleveland’s story the city has planned for the Red Line Greenway (a bike path following the light rail Red Line corridor), the Lorain Avenue Bikeway, the Midway (a system of protected bike highways in the middle of excessively-wide eastside avenues), the Towpath Trail (bike network following Cuyahoga River/Valley from Cleveland to Canton) and Ohio & Erie Trail (a state-wide trail system connecting the Ohio River to Lake Erie), Circle-Heights bike plan (with bike lanes on Edgehill and others to connect University Circle up to the Heights), the Detroit-Superior Bridge bikeway, the Lorain-Carnegie Bridge bikeway, the Shoreway redesign, and more. Lakewood also did a really nice job with Madison Avenue (I however lived near Madison when the street was a poorly marked, road rage-inducing crater field).

I have of course seen the bad, particularly the reverse-buffered painted bike lanes on Lorain Avenue in far-west Cleveland. This was one of the city’s first attempts at large-scale bicycle infrastructure – one that was poorly planned, with the buffer zone placed to protect the curb from bicyclists, and not the bicyclists from traffic. However, since then, the city has been on a tear executing solidly-planned and efficiently-implemented bike lanes – best example being the Detroit Superior Bridge buffered bike lane (pictured below), brought to fruition for only $81,000 (previous plans to do the same would have cost over $4 million). 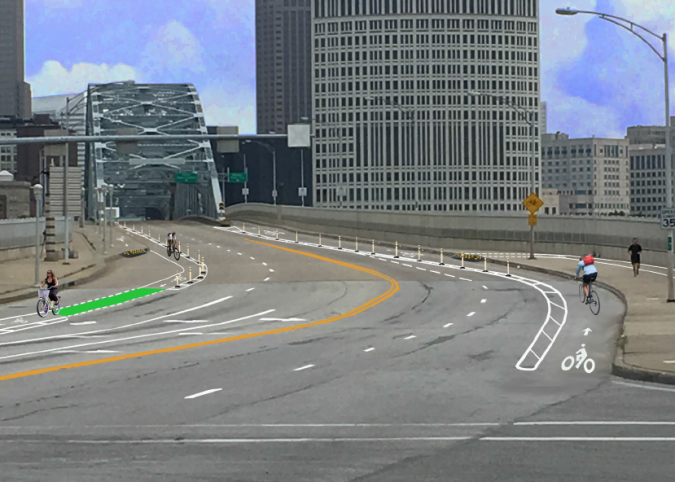 As shown above, these don’t have to be perfect. All it takes is paint, pylons or sticks, and one lane of traffic, and these bike lanes function as well as any. The additional cost between functional and perfect is typically not met by more users; more people would bike if the bike lanes reached farther than if they were nicer.

I like active transportation because there are some ways in which it is equitable or not equitable, and if planned and implemented the right way, can be more equitable and really bring communities together. While access to road-ready bicycles can be difficult for low-income communities, personal vehicle ownership really is lower in these neighborhoods than one may realize, and access to exercise and active lifestyle options are limited. I like bike lanes primarily because they really do bring fitness opportunities to communities and put more eyes on the street at the same time. I am a huge believer that Americans would be so much healthier if they just walked or biked a little bit in their daily routine.

Toward that end, and after some key early successes and lessons learned, Cleveland now appears ready to seriously invest in some of these plans. End of last year, NOACA (the Metropolitan Planning Org for Northeast Ohio) unveiled an unprecedented set of active transportation investments that will get virtually all of the aforementioned plans at least rolling if not complete. $33.5 out of $47 million awarded to regional transportation projects in their last funding round went to active mobility projects. 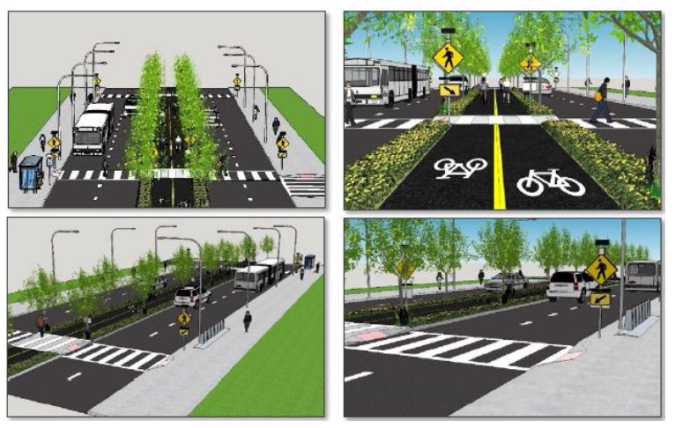 Only $5 million went to roadway projects – $4 million for traffic signal studies across Cuyahoga County, and $1 million for a new roundabout at Landerbrook.

While NOACA is really to be commended for such an unprecedented investment in regional active mobility, this would not be possible if regional planning and transportation entities weren’t putting forward funding-worthy initiatives. This will likely not become the new norm for transportation funding rounds, nor be repeated across Ohio, but for the time being mobility planning wins big in Cleveland.

Cleveland may really be awakening to the amazing potential of its dense albeit patchy cityscape and interesting topography. In particular, the topography with its level coastal plain, wide river valley, lakefront bluffs, and Allegheny Plateau rising on the east side, is a strong hand of cards to be dealt towards the goal of getting people out of their cars and outside in the sunshine. At least half of the year.