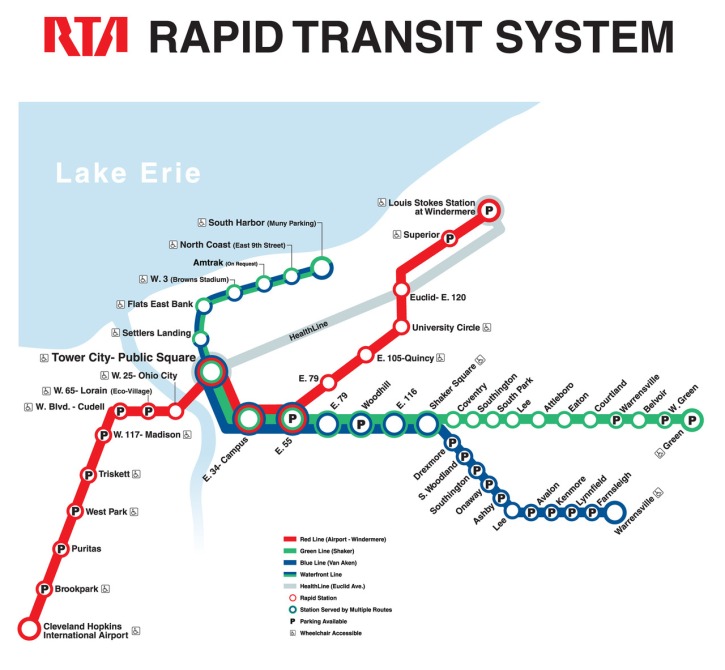 Chart is best viewed with 1280 x 1024 screen resolution (recommended for most computers) or on a tablet/mobile device.

The 9 is a $170 million complex featuring an upscale Heinen’s grocery store in the historic AmeriTrust Rotunda. In the Marcel Breuer-designed brutalist AmeriTrust tower behind, there are high-end apartments, and The Metropolitan (A Marriott Autograph Collection hotel). Photo credit: The Plain Dealer

The Cleveland Clinic continues to build, but the Sydell-Miller Pavilion gave it a centerpiece. Also, the $500 million pricetag distinguishes it from most Clinic projects here and there. Photo credit: The Plain Dealer.

The Horseshoe Casino was a $350 million investment that revitalized the Higbee Building, which the Van Sweringen’s built to house the department store they felt their Union Terminal Complex needed. 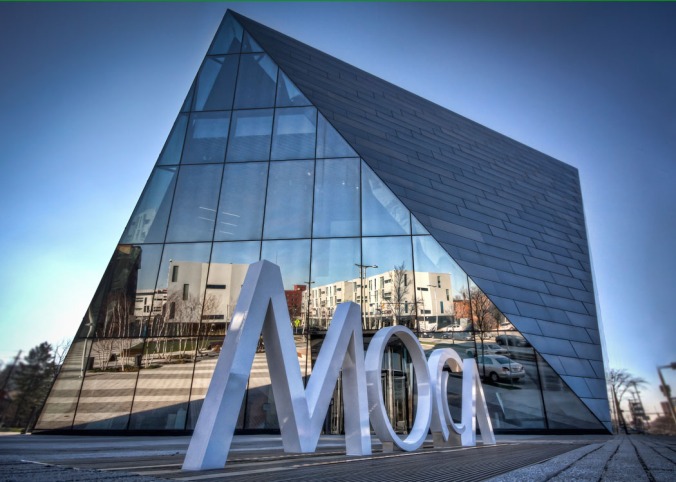 MOCA, the Museum of Contemporary Art, was comparatively cheap at just $27 million, but leverages the impact of its really cool design to make a splash

PlayHouse Square exterior improvements. Again, at “just” $16 million, doesn’t really meet the threshold for this list, if only it weren’t all spent on design that really makes an already-incredible district pop. Pictured: The world’s largest chandelier (hanging over Euclid Avenue)

Battery Park, the $100 million redevelopment of the former Eveready Battery factory complex in Detroit-Shoreway, will feature mostly lakefront condos (330 units). The old power plant has been restored into a wine bar.

In Tremont, the Gospel Press factory has been rehabbed into 102 lofts. Before functioning as a printing press for bibles this complex was the short-lived “University of Cleveland,” that was replaced by Fenn College, which eventually became Cleveland State University. (I may have over-simplified that sequence a little)

The Tudor Arms, rehabbed into a Doubletree in 2011, is even more incredible inside. As a historic tax credit projects, this $20 million investment went a long ways. Typically historic rehabs realize huge cost savings, at least if something large-scale and high-quality is your end goal.

I used to park on this site when I first moved to Cleveland in 2012. And into 2013. Finished 2014. This $65 million project features roughly 200 high-end apartments, dorm spaces for Cleveland Institute of Art, as well as street-level retail including Barnes & Noble, a bowling alley, Panera, Constentino’s grocery store, restaurants, and bars. This was a New Markets Tax Credit project (Constantino’s is a QALICB). 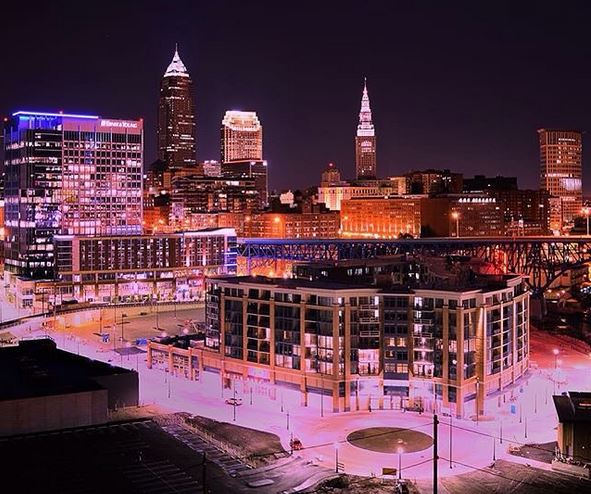 Overall, the Flats East Bank project is a $500 million vision. Phase 1 was the $100 million EY tower + Aloft. Phase 2 mostly completes the project, and brings the residential, retail, restaurant, and entertainment component. This pic from @Clevelandgram on Instagram, progress as of two weeks ago.

UC3, or University Circle City Center, will add 700 mixed-income apartments including a high-rise component. The project anchors the southern terminus of Rockefeller Park, opposite the Wade Lagoon in front of the CMA. 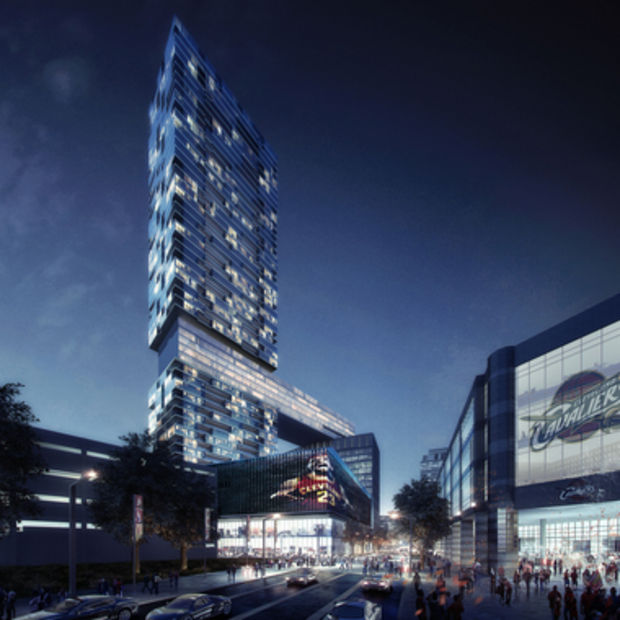 nuCLEus: $300 million, 54-story, 650-foot tall tower. The “jenga” connector, which is a 4/5-story “bridge” cantilevered between the two smaller towers and the base of the main tower. 500 apartments, 400,000 SF of office (leases already signed, lead-tenant will be Benesch Law Firm), and 140,000 SF retail arcade. This WILL happen. Not just because they’ve already secured financing, but also because of developer Bob Stark’s track record, which includes Crocker Park in Westlake.

Bob Stark is also proposing to add apartments, pictured below, atop the garage at E. 6th and Euclid. This is a bit more tentative, and probably gets built after nuCLEus.

Weston and Citymark, two of the biggest names in the suburban Cleveland real estate market, just last week proposed this $100 million behemoth on the above-pictured “World’s greatest parking crater.” Yes, those parking lots that separate the Warehouse District from Public Square/Tower City. When finished this will encompass 1,200 apartments and 3 million SF, broken into two phases.

Intesa, a $100-110 million proposal by Coral and Panzica, is proposed to flank the new Mayfield Road Red Line (light rail) station between Little Italy and University Circle. With 700 parking spaces, 300 micro-apartments, and tech incubator office space – this project will complement the adjacent light rail. If it ever gets off the ground.

One University Circle is a $112-million, 20-story, 240-foot luxury condo tower. This project, downsized from 28-stories at first, is taking the site of the Cleveland Children’s Museum, which has to relocate first. 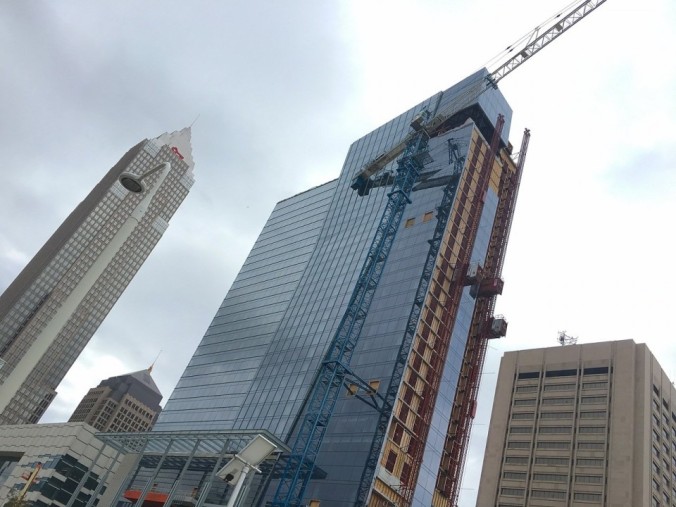 As great as all of these projects are, what Cleveland really needed was a $270 million RNC Convention Hotel. Actually it’ll be great because this 380-foot, 32-story, 600-room hotel will enable to Cleveland to continuously bring in top conventions.

The $32-million redesign of Public Square, consolidating the four blocks into two that function better as one (only buses allowed through). This is one of the public investments making all of this private investment possible.

Upper Chester, by the Finch Group working in tandem with other developers, will fill in the gap between University Circle, Midtown, the Clinic, and Hough. This projects responds differently to the context on all four sides. The $42 million first phase is complete, and the next phase of build-out (three altogether) should start soon. The coolest phase will be the restoration Newton Avenue, a tiny little cobblestone road with cute little wooden homes. Many other developments would demo this street, rather than blending it into a new development.