For all I know, my reputation for questioning most BRT projects probably precedes me. Not unlike most grant-funded initiatives that get off message in order to focus instead on a grantor/funder’s interests – the message that BRT is economic development is all wrong. BRT is one of many transit modes that a city may explore through the Alternatives Analysis phase of a fixed-guideway transit study. Other modes such as streetcar, light rail, or commuter rail will undoubtedly perform better on economic development.

BRT is a negotiated compromise between the ideal and the real; between what is aspirational and what is feasible. With lower up-front construction costs, yet higher long-term O+M costs, BRT is an easier proposition in a public finance system with no money for infrastructure. That BRT can also stimulate economic development is a good thing, but shouldn’t be confused as a unique advantage. 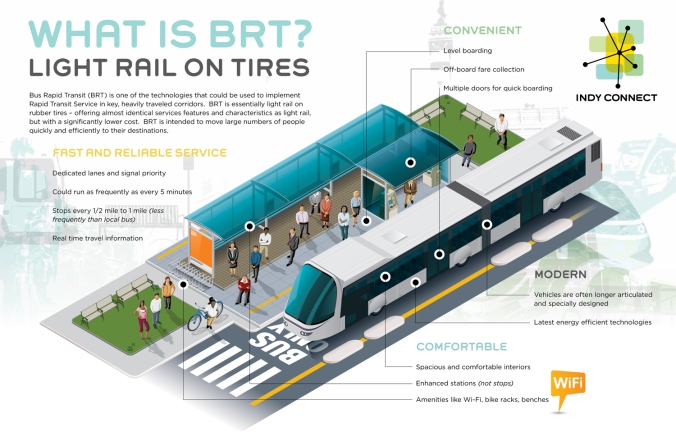 Indianapolis, with its new Indy Connect BRT project, is pioneering the U.S.’ first all-electric rolling stock. These “buses,” if you can even call them that, feature rubber tires, an electric power source (allowing for smooth acceleration and deceleration), and feature a bullet-shaped nose and longer articulation. I’m just going throw out a qualitative observation that Indy Connect is the first of these BRT’s that actually fulfills its promise to be light rail-like. Though, I still cringe to read “light rail on tires.”

I’ll be interested to see what happens in this space, now that the project is funded, and seems to be on the fast track to implementation.